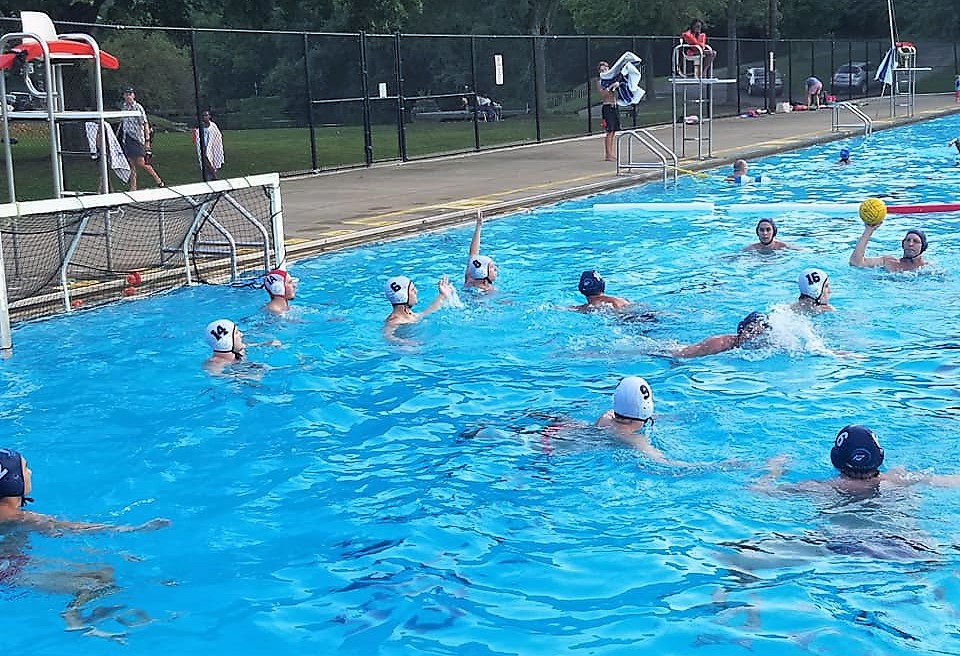 The pool was busy!

Lots of people were looking to cool off on a hot Tuesday evening at Citiparks Highland Park Pool, our first visit for the summer to the facility. As is the case at both Ammon in The Hill District as well as last week’s practices at the Lower Northside’s Sue Murray Pool, the water polo play unfolded in just a part of the pool and the patrons could still swim and got a peek at the sport and its players as well.

As always, the lifeguards and pool managers were fantastic and most welcoming.

The adult lap swimmers like to swim long-course and the schedule for them had been from 6 to 7 pm for the bulk of the summer. They still got in their laps, and at 7 pm the deep end was re-purposed into the water polo course with goals and a line or two to split the game play from the recreational swimmers.

We had a new guy walk into practice tonight. He had not played, but once, in 16 years, so he said. He grew up and played in the past in Egypt. We’ve got a new friend as he bucked up with the college guys on day one! Hero Land! And out the outset of the play, we had only 3 substitute players on our bench. So a few of us were in and out of the pool in quickly, and the W&J guys are all great swimmers. That speaks volumes to the guy’s willingness to play. He did very well, took shots, passed, pressed on defense.

Thank you guys for accommodating my slow playing (second game in 16 years) I am glad being part of this group and look forward for the next training. I promise to get better.

The highlight of the night, if not the summer, was the presence of the men’s team from W&J. They drove up to the city for the practice and workout. It was a change of pace and venue for them as they get ready for their first official games of the season on Saturday, September 1.

Coach Nikola is the best.

Photos, thanks to Joie:

Videos of some action at practice